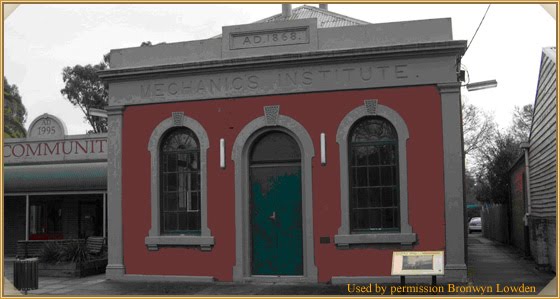 The importance of Mechanics' Institute Libraries in Colonial Victoria.


I went back to the Prahran Mechanics' Institute Library this week, sourcing more material. I came home with some great titles and copies of journal articles they had available. I borrowed a combination of general social histories, histories of specific Institutes and a cultural history of mechanics' institutes and schools of the arts in Australia. I was also able to obtain a great deal of material for my final post when I discuss what the future hold for the remaining libraries.
I had made mention of a few areas I wanted to further explore in my last entry. John Pascoe Fawkner was one. This week I also wanted to clarify the importance of the libraries and explore why they failed.
Findings:


It would seem that John Pascoe Fawkner he was certainly an important figure in promoting libraries in the colonies. He had attempted to establish a library in Launceston as early as 1825 prior to his arrival in Port Phillip. He was certainly an entrepreneurial man. Upon his arrival in Port Phillip he opened the first hotel, started the first newspaper, and founded the first lending library. He was a force behind the Mechanics Institute and a committee member when the Melbourne Institute was founded. He is also responsible for championing the mechanics' library cause and donated large numbers of books to mechanics' institute libraries across the state. The Ballarat Mechanics Institute Library for example started its collection with a donation of 89 volumes donated by Fawkner.
Consensus is that John Pascoe Fawkner was a champion of the working man, (while constantly on the look out for his next money making venture.) Although he was an important figure in promoting the mechanics Institute cause and especially their libraries, another prominent figure in early Melbourne, Sir Redmond Barry is the man to whom most credit should be given. " He stands out as no one person does in any other Colony as predominantly responsible for the growth of literary culture in early Melbourne. He had been founder of The Melbourne Mechanics' Institute, and was later to play a major role in the establishment of the State Library of Victoria..." (Candy & Laurent 1993).
Why they failed:
According to some historians, the decline was inevitable as the Mechanics Institutes were under financial duress from the outset. According to Donald Barker, "In spite of the rapid spread of Mechanics' institutes in Victoria, a continuing feature of their existence was financial difficulty." Rarely did the funds available from subscriptions cover the expenses incurred in building and running the mechanics' institutes, let alone furnish them and stock the shelves with books. From the earliest days the Melbourne, Geelong and Castlemaine mechanics Institutes existed because Govenment funding allowed them to. Many other Institutes were in the same boat.

The Victorian government's Book Grant was a major reason why the libraries were able to continue. From 1860 until just prior to World War I, significant monetary grants were made to mechanics' institute libraries solely for the purpose of  purchasing books. " Brian Hubber explains the importance of the grants thus. "In 1890 when there was no library profession, no library associations, and no organised lobbying for library subsidies, the government of the day was making a substantial investment in colonial library services." Once the funding ceased many libraries were unable able to remain relevant.

Success of the various institutes depended on how dynamic the committee was and how adept at fund raising they were. Maintaining a library was especially problematic.
Historian and mechanics' institute expert Pam Baragwanath, tells us that the task of raising funds to maintain library stocks became an onerous one. "By the time the regional library system was in place, the Institute committees were, in the main, only too pleased to hand the job over to councils."

The Munn Pitt Report into Australian libraries in 1935 was the beginning of the end for many Institute libraries. The report commissioned by the Carnegie corporation was highly critical of our libraies on many levels. It heightened awareness and indirectly led to the passing of "The Library Acts" in the mid 1940's. This is seen  as the beginning of the modern public library system in Australia, and the demise of subscription libraries.

As council run and funded libraries spread across the state post Library Act in the 1950's , the Mechanics Institute Libraries, that remained found it difficult to compete, and slowly but surely many shut their doors. Brigolong Mechanics Institute is a case in point. The doors were locked on its reading room in 1962, but thankfully the collection remains intact and has recently been catalogued. It serves as a fabulous reminder of what these reading rooms meant to their communities.


Importance of the libraries:

At the height of the movements popularity, there were in excess of 1000 mechanics' institute libraries in Victoria. The importance of these libraries cannot be underestimated.

-They pre-dated the municipal library system in some cases by 120 years.

-They gave countless people access to books in a time when only the more wealthy members of society could entertain the possibility of purchasing books.

-In the early days of settlement in the colonies, the mechanics institute libraries provided an invaluable service: Their reading rooms housed collections of newspapers and journals from here and abroad which often provided the primarily migrant population with their only link to news from home.


Although in the long run many of the libraries were unable to continue independently, their importance to the people of Victoria cannot be under estimated. For the longest time they were the only source from which many people could obtain books.

No matter how worthy their intentions and noble their efforts, It seems that the demise of Mechanics Institute libraries was inevitable. Lack of funding combined with cultural and social changes placed them under enormous pressure.

Baragwanath, P 2000, If the walls could speak: a social history of the Mechanics' Institues of Victoria. Mechanics Institutes Inc., Windsor. 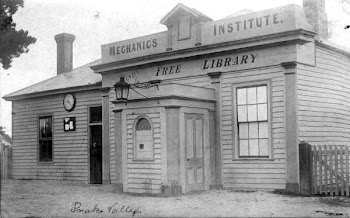